The village of Hickling is thought to have had its origins in the fifth century AD. St Mary's was built in the late 14th century. It probably stands on the same site as an earlier church. Bits of this earlier building have been reused within the present structure. We are not sure when the first church was built here. However there was certainly a church on this site at the Norman Conquest. It is recorded in the Domesday Book, 1086, and was probably of considerable age at that time.

In the 13 century the Augustinian Canons of Hickling Priory, (which had been founded in 1185), began building the present church, of stone and knapped flint. It served what by then seems to have been a village of some importance since it supported a weekly market, granted by King John to the Priory in 1204.

The Church was originally dedicated to All Saints. At the Dissolution of the Priory, in 1536, the church took the dedication to St. Mary, which continues to this day. The extent and shape of the building is probably much as it was at the Dissolution, but at about that time the chancel was reduced in length - apparently due to the collapse of the east end - and the earlier dimensions are indicated by the height of the ground outside. The church was heavily restored in 1875, and the immediate effect of the interior - plain, even austere - is as much the result of that as of the medieval builders. Before this restoration there was an oak screen, a gallery at the west end, box pews and a three-decker pulpit.

St Mary's is open for regular Sunday Morning Worship every Sunday at 10:30am with the exception of the 2nd Sunday of the month, when it is a 3pm Service of Celebration

To view or download a PDF copy of this week's Zoom Order of Service click the button here.

Should anyone wish to join and participate, please contact me so that I can give you the necessary information.

Find out what is happening in the community click on the link below to read the latest news in the Hickling Herald.

On Sunday 13 December the Methodists in Hickling led a Nativity Procession through the village and invited St Mary's to join them.

We started at St Mary's walked to the Greyhound, then to the Chapel and finally to the Barn, the village hall.

At each stop a young person read a part of the story of the Nativity before we, safely distanced, sang a carol.

It was a wonderful celebration of Christmas, much enjoyed by all who participated.

This year the Hickling Parish Council decided to hold a gradual lighting of windows in the village as an Advent Calendar. 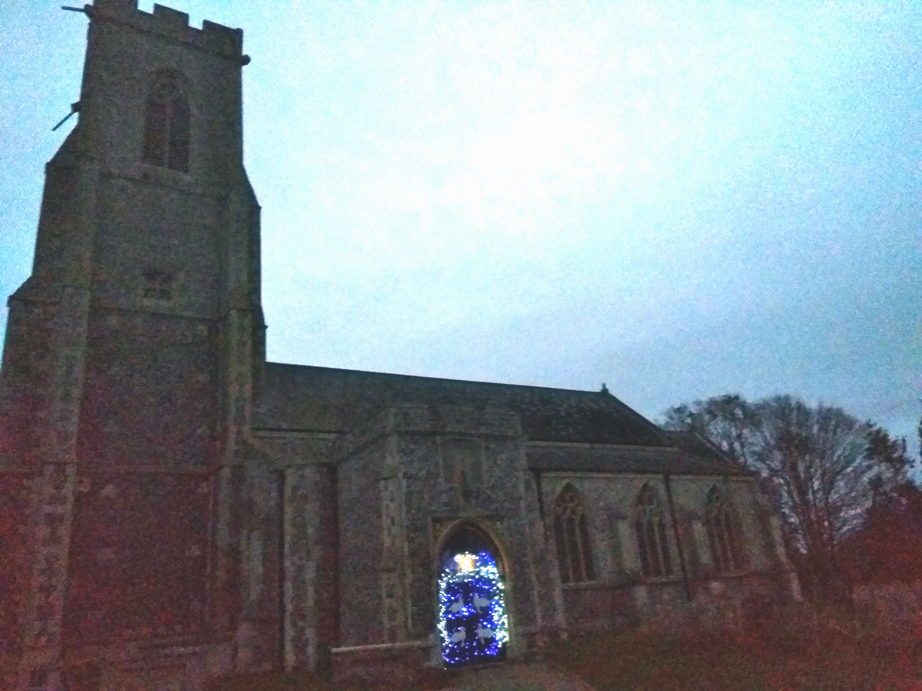 On 16 December the porch of St Mary's was lit - thanks to the creative efforts of Debbie Armstrong and Sandra Clarke. 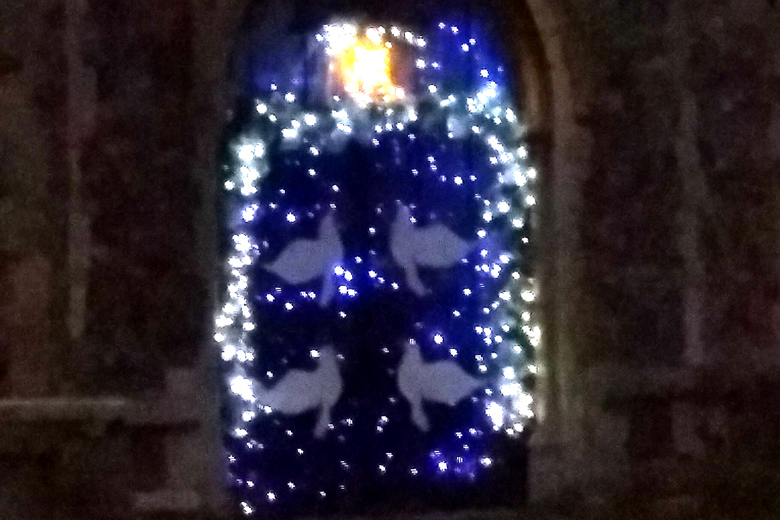 Thanks to the hospitality of the Methodist Church, the Bible Discussion Group that met at The Greyhound will be able to meet together after a break of six months.

We look forward to welcoming new members and old friends to the meetings in the Church Room of the Methodist Chapel in Hickling.

Please bring your own cup or mug for tea or coffee.

All Covid related precautions will be adhered to when we meet.

Everyone is welcome to join us.

We read a passage from the Bible and discuss issues raised – and others.

If you would like to meet us and join us there, please contact Zephney Kennedy Tel: 01692 598179 email: zlkndy@gmail.com

Please check the monthly Hickling Herald or here on the Benefice website for any changes.

On the Sunday of Epiphany, 5 January 2020, the Bishop of Thetford, the Right Reverend Alan Winton, celebrated Holy Communion at the Waterside Benefice Service at St Mary's, Hickling.

The meaningful service and thought-provoking address were appreciated by the congregation, as was the opportunity to chat with Bishop Alan over coffee following the service.

In September 2019, Hickling ringers entered the annual striking competition of the Norwich Diocesan Association of Ringers. This was a great achievement on many levels. We have not even had a band for about 20 years, and the bells have been unringable for much of that time.

The competition was on six bells, and there are only five at Hickling, so we only had one practice as a six-bell band (many thanks to Catfield). Four of the band (Doreen Beales, Linda Marquis, Dave and myself) have been learning to ring for only 18 months. The others were two very experienced ringers – Nigel Moody, and one of our teachers.

We entered the novice rounds category, and were delighted to be awarded second place! What an afternoon! We’d like to thank St Mary’s PCC for making this possible, and to so many people in the village who have encouraged us.

We are now ringing for services at both Catfield and Hickling when we have enough ringers to do so.

If you’d like to join us, or learn more about ringing, pop along to St Mary’s on a Friday afternoon to see what’s involved.

Julian Prayer Meeting in Hickling every third Tuesday in the month

Suspended - meetings will resume as soon as it is deemed appropriate to do so.

However, contact in the group is being continued via email or post of the reading to folk so that they may pray when we would normally meet.

Are you drawn to Christian Contemplative Prayer and Meditation?

We meet in Hickling every third Tuesday in the month at 10:00am.

People from all denominations are very welcome to join us.

In silent, contemplative prayer we seek to be aware of the presence of God and to remain in that presence, completely open to God.

Waiting, Listening, Open, here we meet with God. "All we can do in prayer is dispose ourselves.  The rest is in the power of the Spirit who leads us."
Theresa of Avila 16th C.

The following is material from a recent meeting to aid contemplation.

The thought of my pain, my homelessness, is bitter poison.
I think of it constantly, and my spirit is depressed.
Yet hope returns when I remember this one thing:

The Lord's unfailing love and mercy still continue,
Fresh as the morning, as sure as the sunrise.
The Lord is all I have, and so in him I put my hope.

The Lord is good to everyone who trusts in him,
So it is best for us to wait in patience—to wait for him to save us—
And it is best to learn this patience in our youth.

When we suffer, we should sit alone in silent patience;
We should bow in submission, for there may still be hope.
Though beaten and insulted, we should accept it all.

The Lord is merciful and will not reject us forever.
He may bring us sorrow, but his love for us is sure and strong.
He takes no pleasure in causing us grief or pain.

The Lord knows when our spirits are crushed in prison;
He knows when we are denied the rights he gave us;
When justice is perverted in court, he knows.

The will of the Lord alone is always carried out.
Good and evil alike take place at his command.

Please check the monthly Hickling Herald or Benefice calender for any changes.

We are committed to the safeguarding of children and vulnerable adults and ensuring their wellbeing.

If you have any concerns for a child or vulnerable adult then please contact Zephney Kennedy tel: 01692 598179

As part of The Church of England, The Waterside Benefice, its clergy and leaders are committed to safeguarding as an integral part of the life and ministry of the Church.

‘The Church of England is called to share the good news of God’s salvation through Jesus Christ. The life of our communities and institutions is integral to how we address this task. The good news speaks of welcome for all, with a particular regard for those who are most vulnerable, into a community where the value and dignity of every human being is affirmed and those in positions of responsibility and authority are truly trustworthy. Being faithful to our call to share the gospel therefore compels us to take with the utmost seriousness the challenge of preventing abuse from happening and responding well where it has’.

From ‘Promoting a Safer Church’, The Church of England’s Safeguarding Policy Statement.

or click on the link below to find out how they can help.

Thanksgiving for Creation on 4 October

Photos of our pets were displayed around the church, and the Warden of the Nature Reserve, John Blackburn, addressed us about the reserve and the creatures to be seen there now. 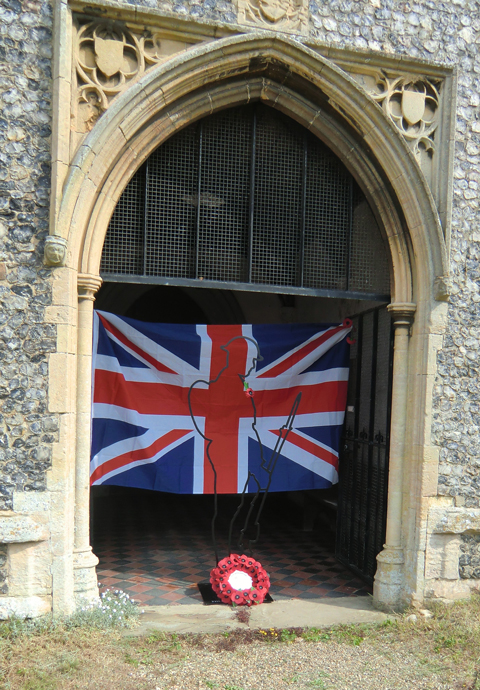 
Many thanks to all who took part and all who attended.

As usual, the collection will be given to The Royal British Legion. The amount raised at the service was a splendid £300.